A long-dreamed dream, it has become a reality. In the presence of a large number of distinguished guests and employees at the Institute for Cardiovascular Diseases “Dedinje”, the new building “Dedinje 2” was officially opened and will start receiving the first patients as early as Monday. The opening ceremony was attended by the President of the Republic of Serbia Aleksandar Vučić, and among the distinguished guests were Minister of Health Zlatibor Lončar, Mayor of Belgrade Zoran Radojičić, Deputy Mayor Goran Vesić, Dean of the Faculty of Medicine Lazar Davidović, Director of the Public Investment Office of the Government of Serbia Marko Blagojević RFZO Sanja Radojević – Škodrić, director of KBC “Dragiša Mišović” Vladimir Đukić, numerous professors of the Faculty of Medicine, doctors of other medical institutions from the country and the region. 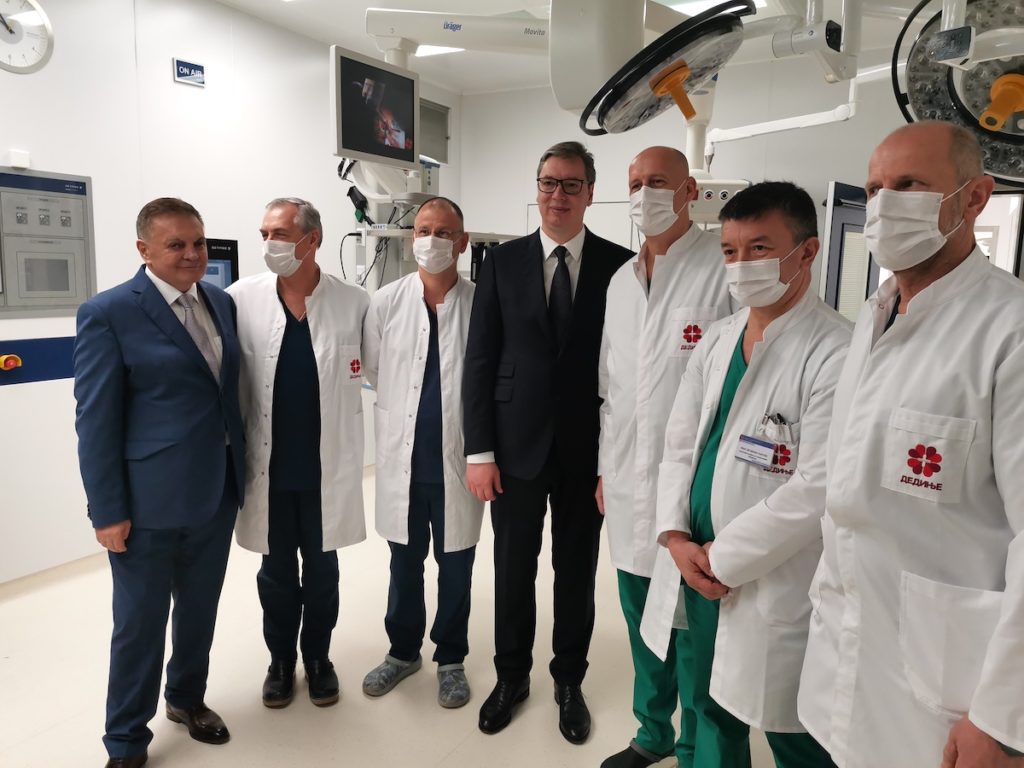 Among the numerous congratulations that arrived from Europe, special attention was drawn to prof. Friedhelm Bayersdorf, director of the University Clinic in Freiburg and president of the European Association for Cardiothoracic Surgery, as well as president of the European Association of Vascular Surgeons Prof. Alison Halliday from Oxford, who pointed out that they are looking forward to the opening of a new chapter in the work of the extraordinary Institute “Dedinje”, as well as future cooperation.

– Today I saw great passion in doctors and medical staff, but not only because of this magnificent space, but also because of the desire and opportunity to save the lives of the citizens of this country – said President Vučić and added that he has never seen anything better. 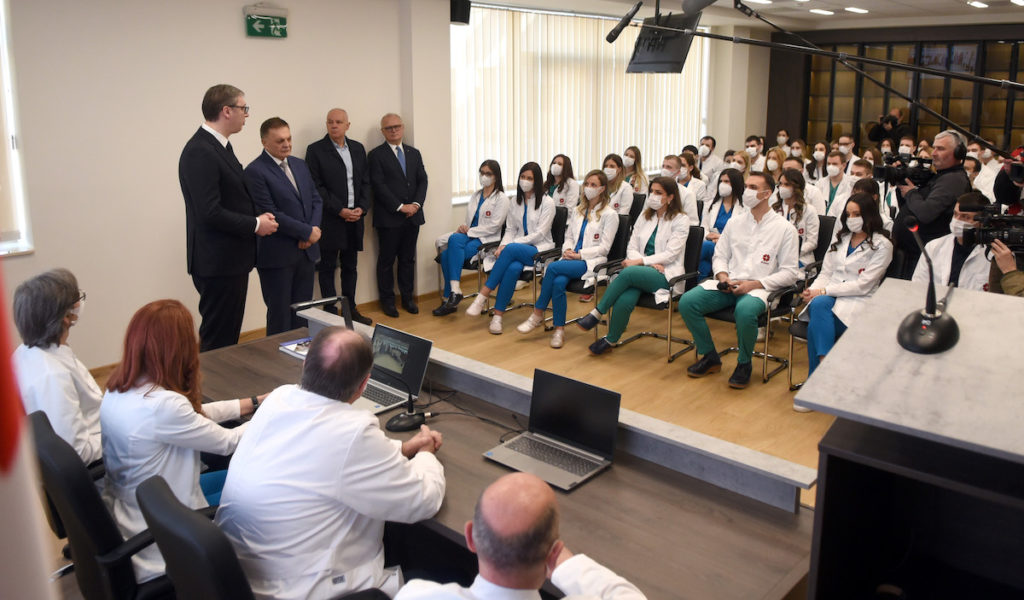 Prof. Dr. Milovan Bojić, director of the Institute, said that this dream would not have been possible without the Government of the Republic of Serbia with the then Prime Minister, and now the President of Serbia, who laid the foundation stone for this hospital on June 18, 2019 and selflessly pledged to this long-dreamed project is finally being realized. 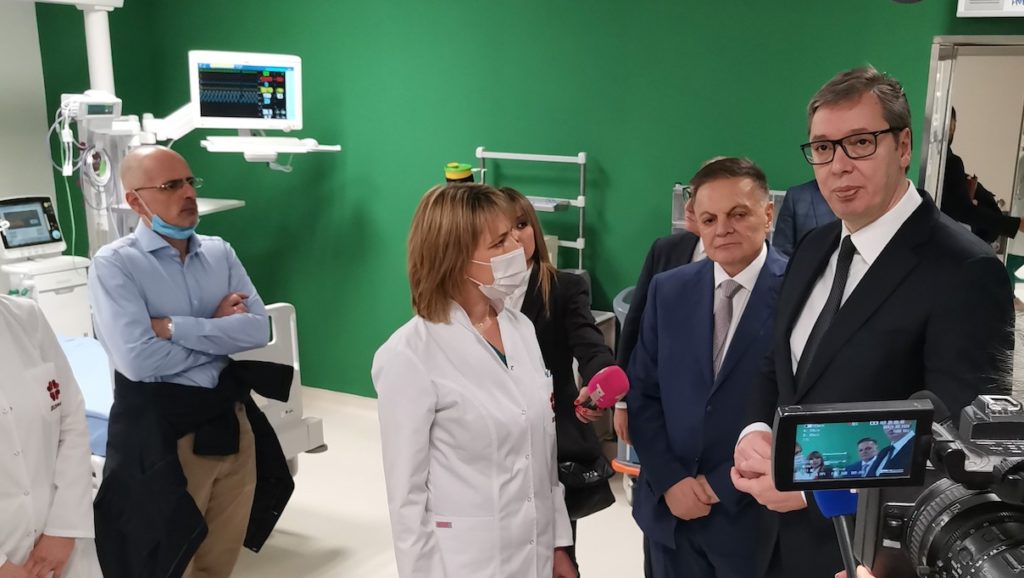 – They say that only those who dream can change reality, and we, dear friends, have bored our dream. Today, our vision is being completed, a project that strengthens the identity of our institution, which has finally become a complete system in terms of space, organization and function. It was a long, not at all easy road, with many obstacles and expectations. We started back in 1978, from the building of vascular surgery, and in 1997, despite great obstacles, we still built the current “Dedinje”. Then we waited for a quarter of a century for today and moving into this building. Dear friends, in the meantime, we have worked hard and achieved top results on a European and world scale, saved hundreds of thousands of lives, enriched Yugoslav and Serbian medicine with endeavors that had never been performed before – said the director of the Institute, Prof. Dr. Milovan Bojić, stating that the biggest names in the world of cardiovascular medicine, such as professors Kuli, Karpantije and many others, stayed at the Institute and were amazed and amazed that we achieve fantastic results in such working conditions – said prof. Bojic pointed out that this solemn ceremony is a real opportunity to warmly thank all the current directors of the Dedinje Institute, all generations of doctors, nurses and technicians, as well as all those who fought and never lost hope. 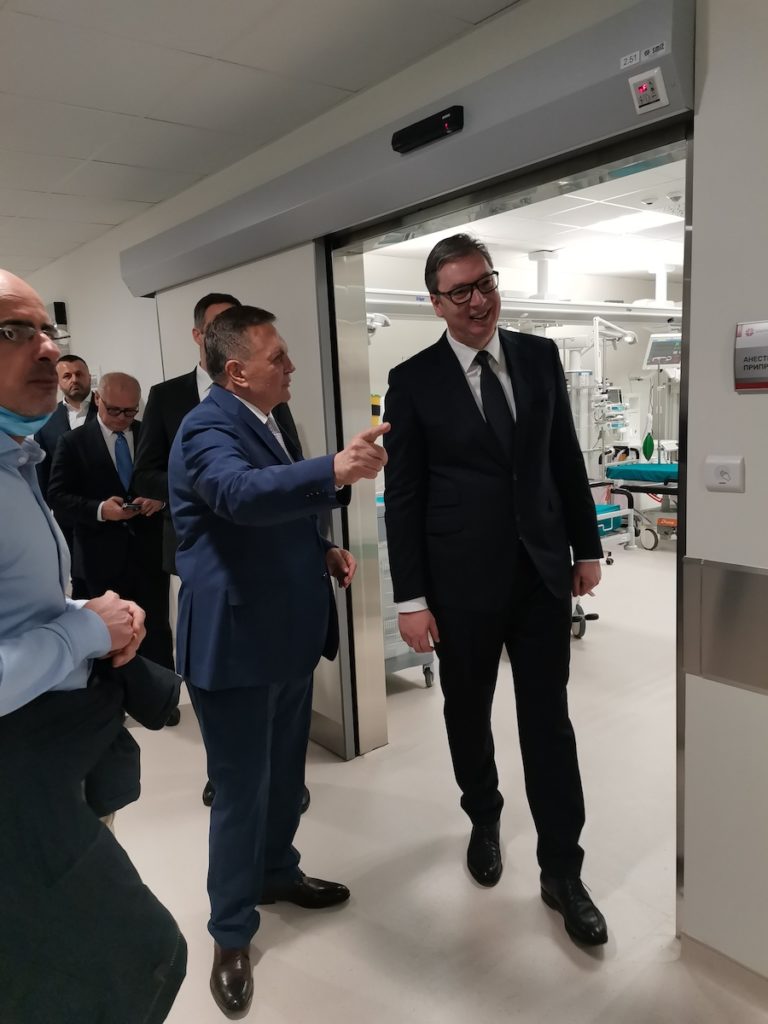 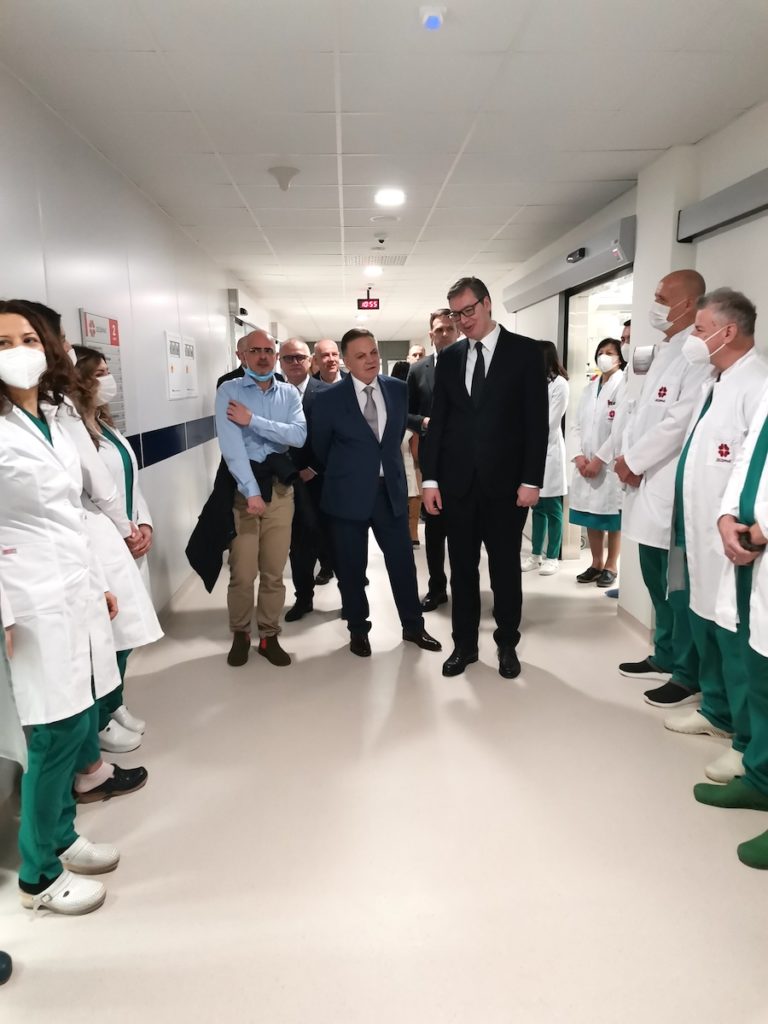 President Vučić said that the Government of Serbia had invested more than 50 million euros in the construction of the new part of “Dedinje”, of which more than 15 million were invested in the most modern equipment. We have received a facility and equipment that can match the world’s best clinics. A lot has been invested, but there is still a lot of work left, because apart from the reconstruction of the old hospital, the problem with parking must be solved.

– First of all, we have to build a large garage, so that patients can come to the Institute unhindered – said President Vučić and added that they are working on considering the construction of a heliport. 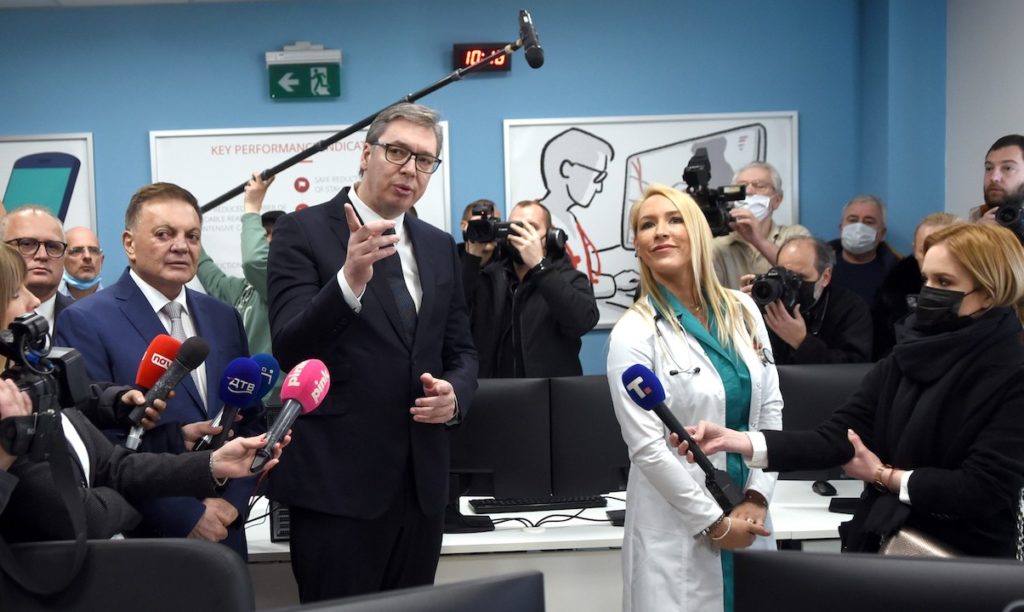 – This is a great investment in the future, in the survival and stay of people. They told me that the European record would be broken on Tuesday, with 20 or 21 operations in one day. I am proud that we have such doctors who live fighting for the health of other people. My request is that we do everything we can to make the waiting lists disappear. I did not even know that 47% of deaths come from cardiovascular diseases, the President added, saying that he was infinitely grateful to the employees of “Dedinje” as well as to director Bojić who put a lot of energy and enthusiasm into completing this clinic and developing it. Serbian medicine. Addressing the director Milovan Bojić personally, the President thanked for all the lives saved and added: – I know how much you dreamed about this 25 years ago, I know that it could not come true, and today it is coming true. Whatever anyone says, this remains a great work done in your time. You have something to be proud of. 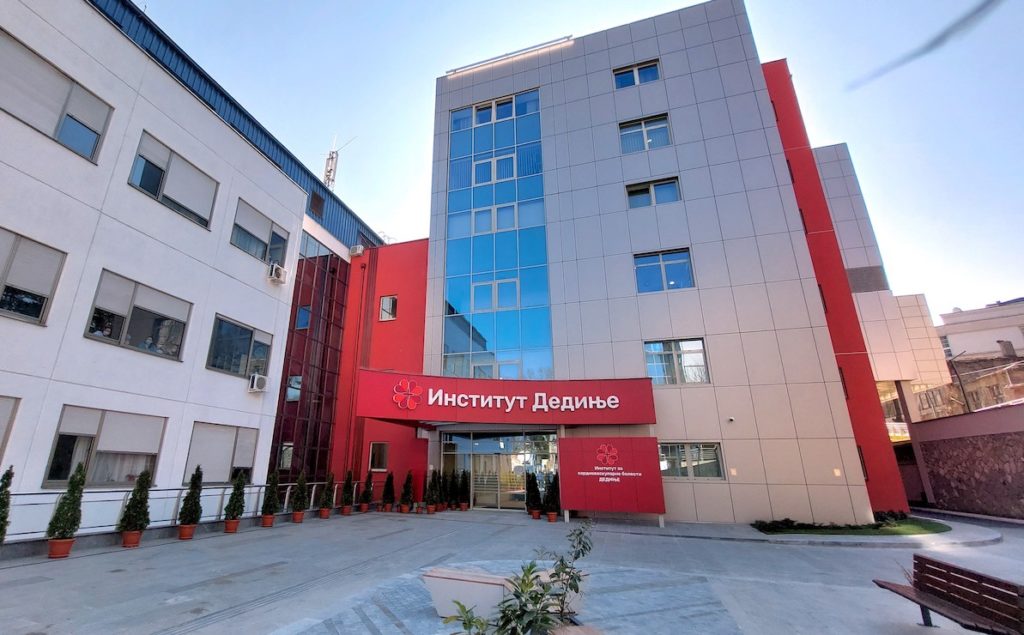 During the tour of the new building, the President did not hide his enthusiasm for what he saw, so he was in a good mood and talked to the doctors and medical staff, who pointed out that they were very satisfied with the new equipment and building.

He was especially impressed by the Telemonitoring Center, which can remotely monitor a large number of the most difficult patients who can be at home during that time, as well as a hybrid room where the patient will be cared for by doctors of various specialties – invasive cardiologists and radiologists, vascular and cardiac surgeons.

He expressed special satisfaction with the meeting with young doctors, whom he told to be among the best, from whom they have something to learn, and reminded them that the results, however, depend on their own efforts.

– A Chinese proverb says that every day a person must work, as he must eat and drink, so I ask you to be diligent and diligent, and not to listen to those who tell you that everything will fall from the sky. You are working even harder than before. I am very happy to be able to see you today – said the President.

-We want to express our gratitude for the opportunity given to us. We have found America and Canada here, and that is why we will do our best to repay our country with our work “- a young doctor addressed the President. 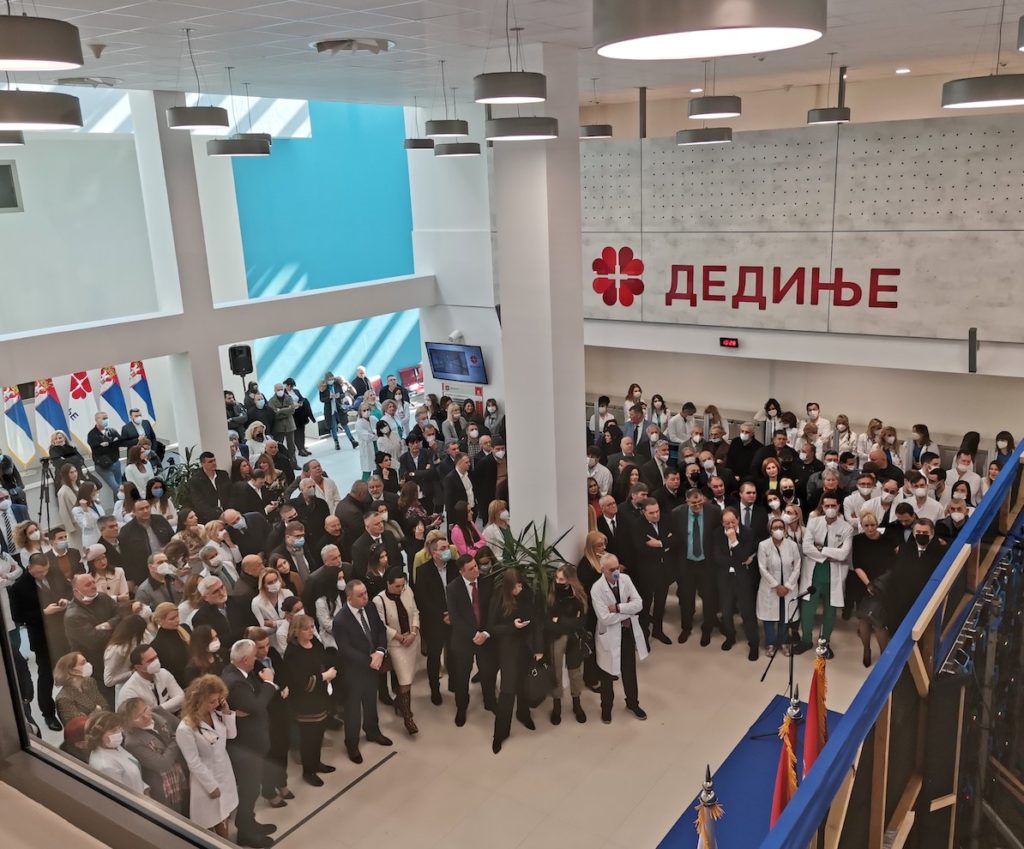 -Let’s do everything we can to be able to abolish waiting lists, to dedicate ourselves to cardiovascular patients, to try to save everyone, old and young. Health is like drinking water, you can’t do without it – said President Vučić and in the end thanked his grandfather’s medics, wishing them much success in healing as many people as possible.

“DEDINJE 2” HAS EVERYTHING WE DIDN’T HAVE

-This magnificent building has everything we didn’t have. The 14,000 square meters house new departments of laboratory, transfusiology, even more modern intensive care, four surgical rooms, the most modern of which is the so-called hybrid room, an operating room reminiscent of space stations, about a hundred patient beds, the necessary logistics space for medicine and non-medicine , spacious waiting rooms and outpatient semi – clinical block, three new angio halls with nuclear magnetic resonance, telemonitoring center, the only one in the Balkans, the latest technology equipment, and there are new traffic approaches. The institute is scientifically accredited, and it has become a center of excellence in several areas. A team for the prevention of cardiovascular diseases has been formed, which will have an advisory role in the field of human health. As the director of this institution, I can only say that the sky is the limit. We will treat patients even more successfully and return them to their families, the economy, the state faster “- Bojić pointed out.